Book Now!
This visually stunning suite was designed by Karen Nelson and Tricia Goins of Design With Your Dime in Mind to pay homage to the infamous Balinese Room that once adorned Galveston's Seawall. With our guests in mind, we focused on making this room comfortable while maintaining a sense of elegance and highlighting the historical features of the space. The long suite with three separate sections is reminiscent of the Balinese Room's structure which cascaded out over the Gulf.
Enter the sitting area of the suite with a futon that converts to a full size bed and a wall-mounted large-screen TV over the bamboo desk and chair. An antique armoire provides closet space that was lacking in 1924 home construction. A microwave and mini fridge are available for your exclusive use.
French doors lead to the bedroom area surrounded by windows with blackout shades for privacy. The Queen size bed is covered in soft Comphy brand linens and fluffy pillows for a cozy night's sleep. The nightstand alarm clock with two USB charging ports ensures you are always connected.
Your own private balcony with table and chairs is located off the bedroom. Step out and enjoy the view of our amazing tropical grounds or enjoy breakfast while listening to the sea breeze and singing birds.
​The Balinese experience continues into the private in-suite bathroom featuring a free-standing shower with two shower heads and a corner bench. The double sink live-edge cedar vanity leaves plenty of room for your personal items. Luxury amenities, plush towels, and spa robes complete your luxurious Bali experience.
​ 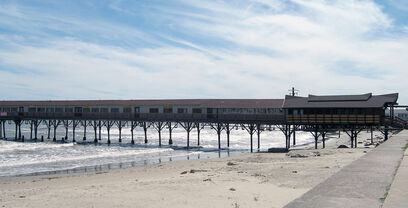 This suite pays homage to the infamous Balinese Room a Galveston Legend which jetted 600 feet out into the Gulf of Mexico.  It was a very popular night club back in the 40’s and 50’s.  Some of the greatest entertainers spotlighted here. Bob Hope, Frank Sinatra, Peggy Lee, ZZ Top and many others.  Patrons often seen here included Howard Hughes, Sophie Tucker [last of the red hot mommas] and well known oil barons from local Houston.

In 1929 two brothers Sam & Rosario Maceo, Sicilian immigrants, took over control of the Balinese Room and turned the back room into a hot spot for gambling with all of the best and most modern gaming equipment.  The Balinese Room became a popular hangout for mob activities.  It was no secret to law enforcement what was going on, but with the paid protection of some of the local sheriffs it became nearly impossible to bust the proprietors.

The Texas Rangers were called in and they set up shop in a nearby hotel and raided the club often, however no success.  By the time they made it down the long pier, all the cards, chips and tables were hidden in secret wall and floor pockets.  The band would strike up playing ‘The Eyes of Texas’ as the Rangers arrived to give warning!
The Rangers did finally shut the club down, but not by a heavy hand. They actually sat in the club day and night until the clientele just stopped coming and the club finally had to close its doors on May 30, 1957.
​
The night of September 13, 2008 the original Balinese Room saw its’ last sunset.  With the arrival of Hurricane Ike and the storm surge that rose above the seawall, The Balinese Room succumbed to the torrent winds and waves, after surviving Carla and Alicia, this was her end.